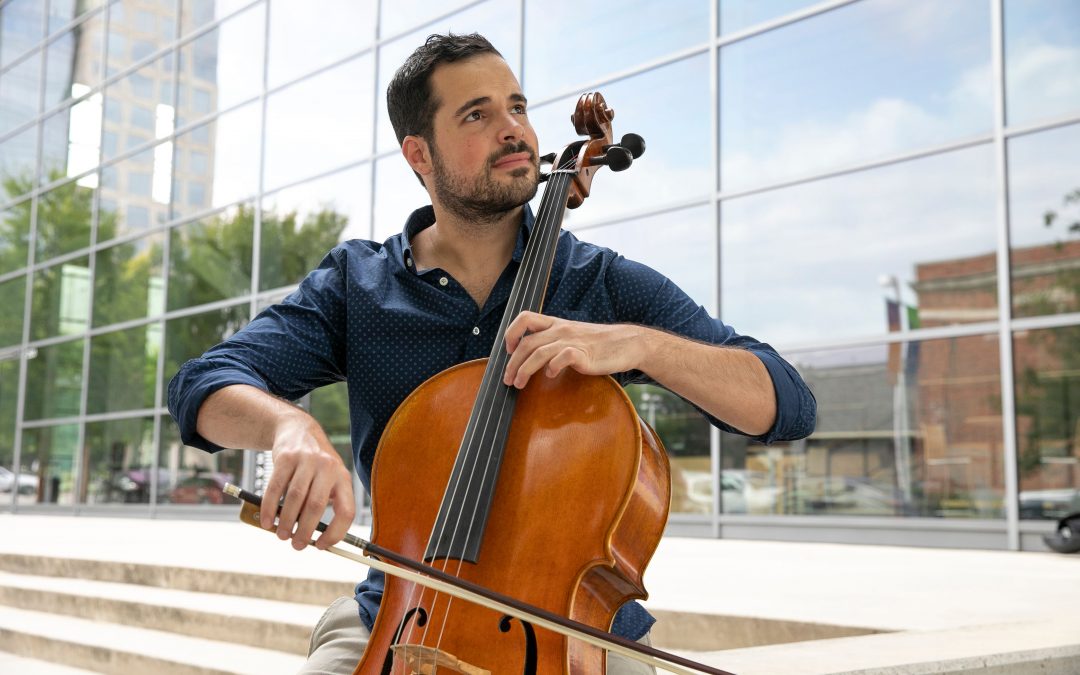 From Bethlehem to Berklee: in conversation with Naseem Alatrash

Naseem Alatrash is not a cellist who has taken a typical route.  With a background in both classical and Arabic music, and a career carved out of playing with Indian raga, jazz and pop musicians, collaboration is at the heart of his work.  With ever exciting projects and ensembles clamouring to work with him and his having recently taken up a post on the faculty at the home of musical collaborative performance education Berklee College of Music, we caught up with him to see how it is all going.

From fustration to renewal

As for most musicians, the last 18 months has been a time when most performing work dried up, a time of constant postponement and cancellation, time spent not knowing whether we will ever get back to doing the thing we love to do – performing, and that aside from the financial uncertainty of not having work. Yet Naseem has been busy, using this unprecedented and unexpected time to ‘get some things done’ as he puts it. He was able to win grants and awards for his work and to write his new suite ‘Bright Colors on a Dark Canvas’ for cello and chamber orchestra which contains the haunting movement called Lifta, after the deserted Palestinian village near Jerusalem. It is due for release in the near future (click here to listen to excerpts from it that were played during the Palmusic Christmas Concert on 12th December, and to hear his interview with our own Wissam Boustani).

From the outside it can seem that work and opportunities are going well, but there are challenges. Living away from home and family is not easy, and the unconventional path he has chosen has its challenges.

I ask Naseem Alatrash if he feels he has to be outside Palestine to make a living as a musician.

In some ways yes. One of the issues there is the small size of the country, and the many borders, not just internal with Israeli checkpoints and movement restrictions, but also the lack of possibility to play in surrounding countries such as Lebanon, Syria, or Iraq. Compare this, he says, to performing in America, where you can do a whole tour just around one state, taking flights, playing in multiple venues. It’s a different world.

He is inspired by how much talent does come out of the tiny country of Palestine, by how much music there is, both because of the conservatory and prior. A ‘birthplace of talent’, he calls it. It is unfortunate that the talent needs to leave to earn a living, I say. Not necessarily. When someone is very established, with an international career, it can be possible to live there, since all concerts would be a flight away anyway. Not easy though.

When Naseem turned up at Bethlehem branch of the ESNCM as a young boy, he asked to learn the violin. But it was the time of the second intifada and the violin teacher had left. Some things are not so different now! But his brother had an Egyptian friend who played the cello and the rest – is history. He notes with curiosity that in his trial lesson, the teacher showed him both Um Kulthoum and Beethoven  and he was intrigued by the possibility of doing both with one instrument. A sign of things to come!

Some might say that he is now at the heart of the collaborative performance world, with the pioneering department at Berklee College of Music. Teaching wise he splits his time between here, where he teaches in the Arabic music and ensemble programmes, the Longy School of Music at Bard College and a more traditional Arabic ensemble at Tufts University. Having studied at Berklee however, this in particular feels like ‘coming home’.  For Naseem, collaboration is at the heart of being a performer, and his recent selection as the new cellist for the Turtle Island quartet is a testament to that.

I’m curious about his teaching though, which has also expanded during the pandemic, as cellists from around the world with unexpected time on their hands reached out for lessons in Arabic cello and maqamaat (the modal world of Arabic music).  How does he approach working with people who already play their instrument well, but in a different style?

‘You have to start from where they are’, he begins.  ‘Classical musicians have often been trained in perfection, but this means they carry a lot of fear.  Fear of tuning, fear of not being right, fear of imperfection.  We work to break this down, to become more open and curious, then to build a new vocabulary.  Jazz musicians usually have an improvising background but their vocabulary is different, so we work to understand the Arabic system. It’s a fascinating process.’

The cello in Arabic Music

And how does he see his place in Arabic music, pioneering an instrument which, while common in the Arabic ensemble, is rarely seen as soloist?

‘Things are changing’, he says, ‘but it’s a process’.  People still wonder why he doesn’t play the violin or the oud, more common soloists. Due to its size and the necessity to shift the hand further, the Arabic cello is certainly harder than the violin, for example, but he sees the cello as having an ‘equal opportunity’ to play soloistically, – even it’s physical position is closer to that of the tradition rabab – and he feels that ensembles sound like they have a tonal gap without cello.

Bringing the cello to the forefront of Arabic music through his composing and performing is at the heart of his work and Naseem Alatrash is a cellist with a mission.